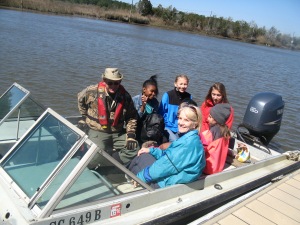 Thursday, March 13, was cold and clear, perfect for a day trip to the nearby Yawkey Wildlife Center.  Dr. Neubauer, Mrs. Crosby and Mrs. Sweitzer drove the 6th, 7th and 8th grade students to the end of South Island Road, where they met D.N.R. agent Jim Lee to take the boat over to Cat and South Island.  There was a lot of wind and the ride was pretty exciting.

The group then boarded a bus and had a look around Cat Island.  They spotted some turkey vultures and several alligators.  Grayson and Wilfredo were convinced that one alligator was chasing them as they were running down a trail.  “I heard it plop in the water when we went by, so we just started to run faster!” Wilfredo said.  The group stopped to view North Island and the lighthouse from across the creek.  Jim Lee told them that Mr. Yawkey’s preference was to keep visitors away from North Island in order to preserve its pristine nature.  The lighthouse, one of the oldest left on the East Coast, worked until someone came and stole the light. 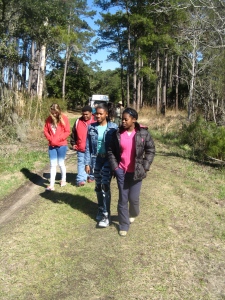 Back at Mr. Yawkey’s game room, the students really enjoyed looking at the “dead animals,” including an elk and a beaver, and Mr. Yawkey’s memorabilia.  Grayson explained, “Mr. Yawkey owned the Red Sox and he had lots of stuff.  There was a World Series ticket that only cost $6.  It was pretty cool.”  The kids were very positive about this field trip.  Thanks to to Jim Lee and Dr. Michelle Neubauer for arranging it. 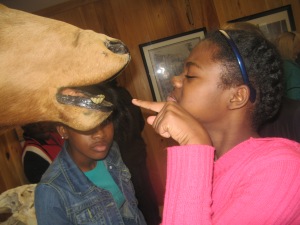