The Georgetown School’s high school drama students took first place in the SCISA Regional One-Act Play Competition at the historic Winyah Auditorium on October 22 with “Wait Wait Bo-Bait,” a series of vignettes about the psychology of waiting directed by TGS drama coach Judith Gates.  TGS middle school students presented “C’mon Dance,” and earned third place with this drama about the value and difficulty of being true to oneself.  Regional second place for high school went to Lowcountry Prep with their original play “Neverland,” featuring Petra Pan, Wendy, kids and pirates, directed by drama teacher Hannah Grippo. 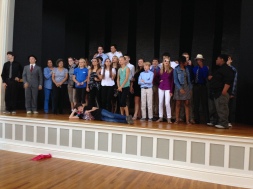 TGS would like to thank Lowcountry Prep, Pawley’s Island Christian and Florence Christian for your participation.  We enjoyed sharing the stage at the Winyah Auditorium with all of you and we enjoyed meeting all the sponsors, parents and kids.  Many thanks to all the drama coaches for your fine work and congratulations to all the winners.  Finally, we want to extend our appreciation to the Winyah Auditorium and our distinguished panel of judges: Jim Calk, Lauren Joseph, Stacy Rabon and Jeremy Vause. We hope to see you next year, so break a leg!

Wednesday, October 29 “Momma” Gates brought an amazingly large sheet cake with icing in our school colors to celebrate the victory.  Everyone had blue lips and teeth there for awhile at lunch! 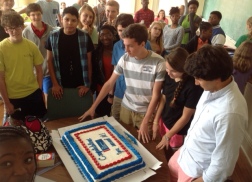