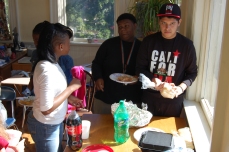 The 2014 Latin II Funeral Games were held on Britain’s southern seashore on Friday, November 7, to commemorate the life and death of Queen Boudica.  First, the Latin II student enjoyed a feast of Italian food: creamy pasta with chicken and spinach, lasagna, Caesar salad, garlic bread and cannoli.  Then all of Middle School went out on the lawn in 5th period to start the games.  Sam (sacerdos) and Grayson (rex) welcomed everyone and Ryleigh explained who Boudica was.

Adara led the games with help from Tiyon and Mme Gates.  First, there was a discus throw, then a javelin toss, then a series of foot races.  The games concluded with a boat race between two British tribes, the Regnenses and the Cantiaci.  It was a fun day–thank you, parents and students!