It almost seemed like a normal field trip at the beginning, getting to school at the normal time and setting 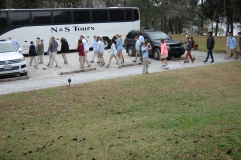 off for Charleston around 9:00.  But December 7 was anything but normal!  Kingfishers were in high spirits as we bypassed Charleston and went up lovely Ashley River Road to our first stop: The Inn at Middleton Place, an architectural gem right here in the Low Country.  The award-winning hotel was designed by W. G. Clark, who believes that architecture should be “atonement for the disturbance of the land.”  His buildings are known for fitting in to their natural surroundings, like ruins in an overgrown forest, and The Inn is no exception.  Isaac took 1000 pictures in the first ten minutes.

Back on the bus, we headed to the area around Yemasee to explore our second architectural wonder, the ruins of Sheldon Church, which inspired W. G. Clark in his design of The Inn.  Sheldon Church is just a brick shell now, covered in ferns and surrounded by graves and ancient oaks.  It was twice burned and has never been rebuilt.  Students read the grave markers, wandered in and out of the structure, and tested the water-pump.  This was a very peaceful and beautiful spot. 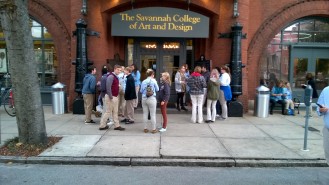 We kept heading south, eating an early lunch before arriving in the historic city of Savannah.  The high school kids had a tour of the Savannah College of Art and Design while the middle school kids visited the SCAD Museum, then did a walking tour of Savannah.

After leaving Savannah around dark, we settled down to some serious competition in the bus.  Each senior had a group and the group had to compete in various challenges over the trip.  The first challenges were some head-scratching math and picture puzzles.  “Do you want another hint?” asked Dr. Gates after giving a particularly challenging math problem. “NO!” screamed the groups at the back of the bus.  Chris was the first to bring an answer to Dr. Gates, but there was a slight mistake.  Kate actually got the problem perfectly a few minutes later, and proclaimed herself her brother’s superior.

We arrived at Jaybird’s Inn in downtown St. Augustine in the late evening, making an early night of it to be ready for the next day’s adventures.  On the morning of December 8, we headed the old part of the city and the bus put us out at the Cathedral of St. Augustine.  Seniors and faculty led groups in exploring the narrow streets between there and Flagler College, pausing only to take “interesting” group photos (part of the competition).  When we had regrouped at the Cathedral, Dr. Gates led us along the waterfront to the Castillo del San Marcos, the oldest masonry fort in the U. S.

amazing site.  Then we crossed a moat and entered the fort proper, where another park ranger led us from area to area and explained all the architecture and history.  She was the great grand-niece of a writer who helped turn the site into a real museum.  We saw graffiti carved on the walls by Native American prisoners recalling their customs, as well as bunk beds for the soldiers stationed there.  The fort was a really cool place but soon everyone was starving (that always happens in museums!).

So Dr. Gates took us to the Spanish Bakery restaurant for a lunch of empanadas, chili and soup in a little courtyard.  There were several chocolate stores and gelato places in close proximity, a nice bonus!  After fueling up, we went back to the hotel for our beach gear and re-boarded the bus for Vilano Beach.  It was much like our beaches in S. C., but with a heavy shell wash and a rather steep drop-off that discouraged body-surfing (just ask Ethan!).  Most people swam, despite the cold temperature of the water.  Then the competition continued with volleyball and Mölkki (a sort of Swedish beach bowling game).  Everyone was covered in shells, sand and feeling quite chilled by the time we went back to the Jaybird’s Inn for a quick shower.

Dinner, arranged by Mrs. Montgomery, was on the patio at the Bull and Crown.  The servers had a hard

time keeping up with our giant group but it was fun to sit outside and hear the live music (American-Irish folk/rock with guitar and mandolin).  We split up into groups for a final evening challenge: which group could take the most artistic photo?  It was fun to wander around—people on the tour buses kept yelling “Merry Christmas!” and we saw a lot of students from Flagler College.

Back at the hotel, we grouped up to vote on the best photos of the day, then hit the hay for an early start on Friday.  We were packed and ready to go by 9:30 the next morning.  The bus delivered us to the Cathedral again and we walked over to the Lightener Museum, the converted premises of the famous Alcazar Hotel.  There was a lovely courtyard with masses of poinsettias and a pond full of giant koi.  The museum itself was at the back.  We began with Mr. Lightener’s collection of mechanical musical instruments, an amazing assortment of non-electric and partially electric machines, including the world’s first “juke box” and “CD” player. Several used binary code just like a modern computer does.

The Turkish baths, ballroom and giant swimming pool were next, all beautiful and luxurious.  Then we visited two rather eclectic rooms of special collections, including Native American artefacts like a shrunken head, headdresses, arrowheads and clothes along with much more from all continents and all time periods.  Mr. Lightener seemed to collect a little of everything!  When it was time to go, many students chose to buy a tiny hurdy-gurdy as a souvenir of the music room. The most popular choice was one that plays “Amazing Grace.”

After one last walk down Cathedral Street, tired Kingfishers boarded the giant white bus and headed

home.  This trip gave us a lot of opportunities to learn about the relationships among Charles Towne, Savannah and St. Augustine in the colonial days and in every war up to WWII.  We don’t think much about the possibility of our cities being raided by a foreign army or pirates anymore but it happened regularly to the people who used to live along our coast.  Traveling the coastal roads and seeing the ruins that resulted from all the raids over the years helps us understand who we are.  Thanks to Dr. Gates and Ms. Josie for planning, to the teachers for chaperoning, and to the parents for not revealing a thing this year!