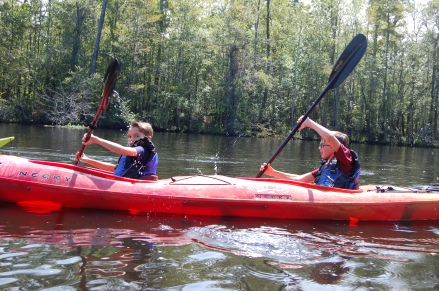 TGS’s kayaking trip on Thursday, September 7 was a wonder of controlled chaos. Originally, the trip had been scheduled for the previous Tuesday, but was cancelled due to we

however, the weather was perfect. Blue skies distracted everyone from the impending doom of Hurricane Irma, and a light breeze kept the temperature pleasant.

Leaving the school proved difficult as students raced in and out of the building, unsure of what to bring. Once we arrived at Pine Tree Landing, students congregated around the parking lot, waiting for the last few cars. Isaac, Taylor, and Ella sang a funny song involving lots of hand-clapping. All around, students marveled at nature: mostly, the amount of bugs. Then, our guides for the day from Coastal Expeditions took over. Our guide Henry explained the game plan, Mrs. Crosby announced who would be kayaking with whom, and our guide Katie demonstrated proper kayaking techniques, and we were ready to go.

At first, the river was filled with kayaks wildly swerving back and forth in mostly unsuccessful attempts not to run into each other. Soon enough, most kayaking pairs got into a rhythm, and we set off down the river after Henry. Almost an hour later, we reached our destination – a small bank on the side of the river. The first four or five kayaks were able to reach the shore, but the others simply held on to the kayak in front of them to form a giant cluster. Our guides Jeff and Greg took turns explaining the natural and human history of the Black River before we turned around to paddle back.

Where the trip out had been full of uncertain kayakers learning how to control their boats (or work with their partners), the trip back quickly devolved into a splash fight. Now fully confident pairs would maneuver their kayaks around the river to soak their targets of choice. Dr. Gates and Johnathan snuck up on several unsuspecting boats at the front of the pack and sent waves of water their way. While waiting to disembark, the seniors and their kayaking partners met up and jammed out to some music. The school then enjoyed lunch at the landing before the volleyball team left for their game at Marlboro Academy and the rest of the school traveled back to Georgetown. The kayaking adventure was over, leaving us tired but wishing for another trip. Special thanks to Coastal Expeditions for giving us this amazing opportunity!