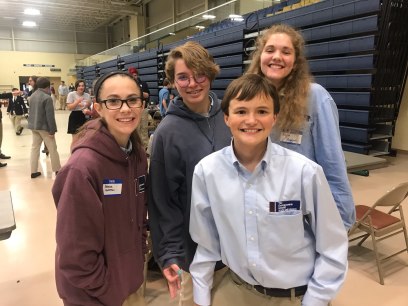 Kate emerged as the star of our Chess Team at the SCISA State Chess Meet this year.  Mr. Bonds (team sponsor along with Dr. Gates) took Jack, Naomi, Rebecca and Kate to the Sumter Civic Center on November 13 to compete with 140 other kids.  At the Civic Center, each participant played seven rounds of speed chess against different opponents.

“It was a good day,” said Mr. Bonds.  “I was satisfied with the level of personal fulfillment that each student walked out with.”

“The Chess Meet was great and very well organized,” said Naomi.  “Everyone was really nice playing and I made a friend named Raj.”  Naomi beat Raj pretty easily in the first round and they both had a good laugh.  Naomi went on to say that the team had fun and learned a lot from playing against people they didn’t know.  Apparently, the team picked up an exciting five-move checkmate strategy which some of them were able to use successfully in later rounds.  Jack agreed, “It was very fun!”

Kate won five of her seven rounds while the other Kingfishers each won two.  The whole team learned a lot from the experience even though they did not place.  We have high hopes for this young team.  Good job, Chess Team!