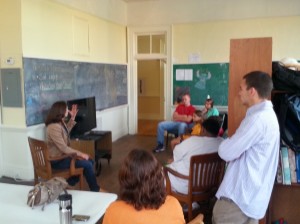 Our Open Forum speaker on Wednesday, October 9 was Stacy Rabon, whose acting career began with training at the University of Nebraska and the prestigious Lee Strasberg Theatre and Film Institute in Los Angeles.  Stacy has worked steadily as an actor ever since, including a long-running part on daytime television’s The Guiding Light.  She talked to us about method acting, the audition process, and what a director’s expectations are for someone who is a “day actor.”  She also explained the differences between acting in a play and film acting.  Stacy’s most recently role is in a horror movie, The Occult, set to premiere in January 2014.  She told us that actors have fun doing death scenes. “The one-sheet [movie poster] features my character moments before she gets impaled on a church steeple!” Stacy said.