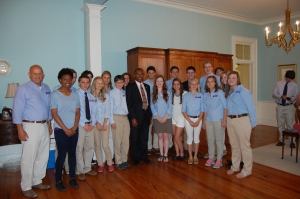 National politics made a show in Georgetown on Friday, May 8, when newly-announced Republican presidential candidate Dr. Ben Carson chose the Winyah Auditorium as the venue for one of his very first campaign speeches. Organized by the Georgetown County Federated Republican Women’s Club, the event attracted a overflowing house and Kingfishers were on hand to help. At the ready in our uniforms, we moved chairs, hung signs, directed traffic, ushered in people with tickets and guarded the doors to the reception in the Es’Dorn Room afterwards.

Before Dr. Carson arrived, Kingfisher journalism students took pictures and circulated, talking to the attendees. Adam (no last name) is a proponent of private enterprise who was asked by Dr. Carson to follow his campaign and sell his buttons and tee shirts all over the country. Former Georgetown mayor Linwood Wilson told us he thought Dr. Carson was serious about running for president–he wasn’t just doing it to raise his ratings on Fox News. Many people tried to get in, even though they hadn’t preregistered. Nathan and Zach, who were ushers, had to actively block them at the door. “Yes, I have a ticket but I don’t want to show you right now,” said one lady as she tried to push past. TV and news media had special permission to use the balcony and Kingfishers watched the event from the balcony’s double doors.

Dr. Carson’s speech drew applause from the crowd on points such as businesses making money, a tax holiday to bring American money back from overseas, lower corporate tax rates, a flat or fair tax for individuals, support for Israel, reduction of the number of government employees, help for veterans and more money for our military in the war against Islamic extremists and maintaining the Constitution.