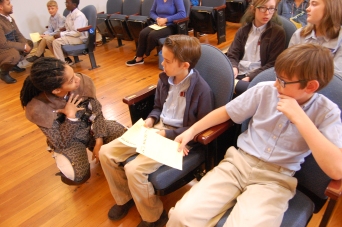 Ambition, madness, blood, humiliation, clashing egos—all loomed larger than life as two of Shakespeare’s works were brought to life during the fourth annual Georgetown Shakespeare Festival. The traveling troupe of the American Shakespeare Center played to a full house at its matinee performance of Macbeth on February 2 while a record crowd enjoyed the evening performance of The Taming of the Shrew on February 3. Both plays were performed at the historic Winyah Auditorium. The Georgetown Shakespeare Festival is organized each year by our school with the help of generous sponsors.

The American Shakespeare Center sets itself apart by staging Shakespeare’s plays the same way Shakespeare or any other Elizabethan director would have. Actors play several roles in a single play, with men often taking the parts of women and vice versa. Because the stage and seating area are both lit, players and spectators can see each other. Seats up on the stage allow actors to interact with audience members. Live music accompanies all productions.

Close to 300 area students watched enthralled as Macbeth (Calder Schilling) allowed himself to be tempted by his wife and his own ambition into killing King Duncan (Ronald Román-Meléndez), then into committing even greater crimes. The prophecies of the Weird Sisters (Hilary Aleca Caldwell, Kyle Powell, Annabelle Rollinson) and the Ghost of Banquo (Josh Clark) mesmerized the students. “The witches gave me chills,” said Sydni.  Many students gave Macbeth kudos on social media. 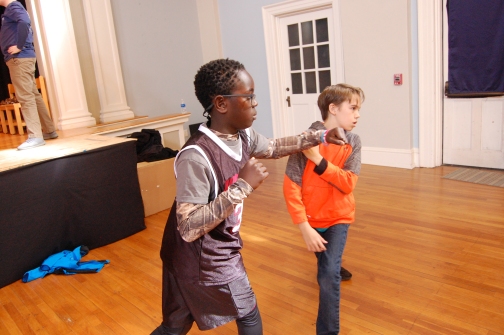 “The ASC’s talent is amazing,” said Shannon Lewis, former colleague of TGS faculty and now an English teacher at Myrtle Beach Middle School.  “What an incredible opportunity for our students to enjoy live theatre.  Macbeth is a standard in the high school curriculum so it was great for our students to see the play as it was meant to be seen.” Lewis was there with 105 MBMS students. She and several other MBMS teachers have brought well over 400 middle school English students to the Georgetown Shakespeare Festival since 2015.

Sandra Perry, teacher at Francis Wardlaw Academy, brought 14 students all the way from Edgefield to see Macbeth. “One of our young men lives almost an hour from the school so he had to rise at 4:30 am,” she said. “But he said he would do it again.” Perry hopes to generate enough interest in her students for an overnight stay in Georgetown next year.

“We are very privileged to be able to partner with the ASC,” said Dr. Gates. “Every year our kids look forward to their arrival. Live theatre of this caliber usually only happens in big cities but the ASC has been bringing the magic to Georgetown for four years now.” 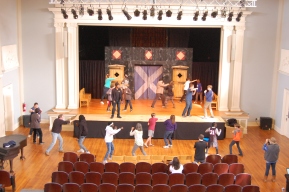 On Friday evening, there was a special showing of Cole Porter’s and George Sidney’s musical “Kiss Me Kate” the Strand Cinema on Front Street. “Kiss Me Kate” (1953) is loosely based on The Taming of the Shrew and features funny songs and lots of tap-dancing. We were so glad to partner with the Strand for this warm-up to the ASC’s The Taming of the Shrew.

The audience at The Taming of the Shrew enjoyed a half hour pre-show of live and unplugged music performed by the actors on various instruments. Then the ASC players came back on stage for the main event–a riveting comedic performance of Shakespeare’s famous battle of the sexes. The chemistry and awakening affection between Kate (Annabelle Rollinson) and Petruchio (Ronald Román-Meléndez) was very authentic, despite their outward behavior towards each other. The audience was able come to terms with Kate’s submission to her new husband. ASC players received a standing ovation, then mingled with members of the audience to answer questions and take pictures out in the hall.

On Saturday during the day, the ASC also hosted two educational workshops for students at The Georgetown School and interested members of the public. In “Sound Effects in Macbeth,” Thomas Coppola and Ally Farzetto led an exploration of the various instruments used to create the sounds of storm and battle for that play, such as the thunder-sheet and drums. A percussion instrument called the water phone provided the haunting ethereal music for the Weird Sisters’ and Banquo’s apparition. The participants tried their hand at playing the instruments and reading scary passages to create dramatic effects.

“It takes one hour of practice to create ten seconds of fighting on stage,” the ASC’s Josh Clark told students at the beginning of the “Stage Combat” workshop. He and fellow actor Kyle Powell explained the three principles of fighting on stage: safety, believability, and storytelling. Participants enthusiastically paired up with each other, learning how to create realistic stage punches and slaps in slow motion. They learned that the “victims” are as important as the “attackers” because they are in charge of reacting at the right time and making the sound. “Always make eye contact before you throw your punch,” Powell instructed. “Pay attention to the cues.”

The Georgetown Shakespeare Festival ended on February 7 with a talk for students and the general public by Richard Willis, a practicing attorney in Columbia, professor of law at USC, and Shakespeare scholar. Willis spoke at Open Forum about Shakespeare’s power to stimulate our imaginations and our empathy for others. Willis was impressed at the number of plays TGS students had already seen. “You guys know more about Shakespeare than any other audience I’ve talked to lately,” he told the students. “Good job!”

Willis was also the featured speaker at a Continuing Legal Education seminar on “Shakespeare and the Law,” organized by local attorney and TGS mom Elizabeth Attias for about 25 participants, also on February 7.  “Shakespeare loved lawyers,” said Willis. “He put trials in 18 out of 37 of his plays. Why? Because trials are conflict and audiences love good conflict.” Willis’ presentation “The Trial of Hamlet for the Murder of Polonius” featured live acting by several TGS students.

“The American Shakespeare Center will definitely headline our Shakespeare Festival next year,” said Dr. Gates. “In 2019, the ASC will be touring with two Shakespeare plays—The Winter’s Tale and Comedy of Errors, plus the classical Greek tragedy Antigone.”