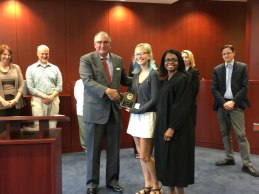 As the end of the school year draws near, the winners of scholarships are announced. In the last few weeks, TGS students have been fortunate enough to win several. On April 18, the Daughters of the American Revolution awarded Avery Rose the Good Citizens Award, which recognizes a student’s leadership, community involvement, and patriotism. They also awarded Isabella with a $2500 merit scholarship, one of six across the county. Only two weeks later, on April 26, the Georgetown Times and South Strand News recognized TGS students at their Prep Sports Awards banquet. Isabella and Chris were named Scholars of the Year, Margaret Team Leader of the Year, and Tyvon Player of the Year in boys’ basketball. Finally, on May 1, the Georgetown County Bar Association announced the winners of their Law Day essay contest. Isabella won overall, taking home the grand prize of $500 and a spot in the state competition. Congratulations to TGS students!