Five wonderful graduates took center stage at The Georgetown School of Arts and Sciences’ fifth commencement ceremony, held on May 25 at the Winyah Auditorium.  Friends, faculty, fellow students, founders and family from as far away as Kansas and Colorado were on hand to celebrate the joyous occasion.

Father Paul McNeil of Precious Blood of Christ gave the Invocation.  Joyce Gates, president of the TGS Board of Trustees, welcomed the crowd warmly and congratulated the school on five successful years of living out its principles: excellence, honor, inclusion, respect. 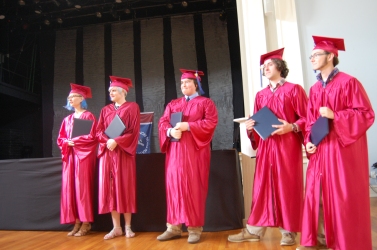 Salutatorian Christopher Attias thanked the faculty and exhorted the upcoming Kingfishers to shoulder the job of making the school an even better place.  “Step up,” he said.  “Take responsibility for yourselves and this school.”  At the TGS Awards Ceremony earlier that day, Attias received a scholarship award from the University of Alabama Honors College, worth $194,000 to cover his next five years’ schooling.

Valedictorian Isabella Neubauer shared memories of her time at TGS.  “School has never just been about sitting in the classroom for me,” she said, evoking school trips and being on the volleyball team.  She touched on the sense of unreality about leaving TGS: “I am barely 18 and I am about to move halfway across the country!” Neubauer will attend Washington University in St. Louis.

Chris Elliott, TGS’s very first valedictorian back in 2014, gave the commencement address.  He said that he was in awe of what the school had accomplished in five years.  “This isn’t some cookie-cutter college prep school,” he told the crowd.  “TGS takes students from all walks of life and turns them into scholars, with the desire to learn more, do more, discover more.”  Elliott has just graduated from the Honors College of the University of South Carolina.

The five graduates blinked back tears as Dr. Gary Gates, Head of School, called the Roll and spoke about each of them in turn.  As they received their diplomas and stood before the assembly, the emotion was palpable.  But when Father Paul gave the Benediction, all sadness and uncertainty turned to joy.  Friends and family rushed down the aisle of the Winyah Auditorium to congratulate them on this step in their journey.

The 2018 TGS graduates are: Christopher Attias (Univ. of Alabama Honors), Douglas DeVito (Univ. of S. C.), Avi Goldschmidt (Univ. of Wisconsin, Madison), Avery Rose Higgins (College of Charleston), and Isabella Neubauer (Washington University).  Besides finishing their coursework, TGS seniors must do 25 hours per year of community service, complete an internship, and give a senior speech.