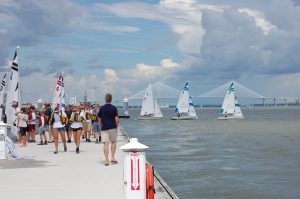 It was hot and muggy at 9:45 Saturday morning, September 13, when 13 high school sailing teams turned up for the skippers’ meeting of the SAISA Charleston Open Regatta at the Charleston Community Sailing docks.  The Kingfisher team was represented by Savanna and Nathan, (along with new team member Bronwen who came as an observer).  First, thirteen 420s had to be towed around the Charleston Battery to the Carolina Yacht Club, where there was plenty of open water to create a course.  When the boats arrived, the regatta began and teams lined up from 11:00 to 4:30 to race around four buoys and be the first to sail past the finish line.

Spectators for teams such as Bishop England, Ashley Hall, Lake Norman and Beaufort High sprawled on towels and in deck chairs, watching the course through binoculars and straining to interpret the movement of the bobbing boats.  The concrete dock was littered with life vests, coolers and people relaxing in the sun.  The wind finally came up and it turned out to be a decent day for racing.

“My race was fun,” said Nathan.  “It seemed like we were out there for a short time.”  Savanna agreed, “I had fun, even though it was a long tow back to the marina.” Nathan and Savanna sailed with Griffin and Sydney of WHS in four races; the boys placed 7th and 8th (we think) while the girls place 5th and 10th.