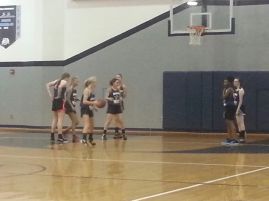 The evening of December 2 marked the start of our very first basketball season at TGS! Our Kingfishers entered the Lions’ den of James Island Christian and did their best to hold their own.  Although the Lady Kingfishers led through halftime, the Lions came back to win 39-23. The boys also lost to JICS in a friendly scrimmage. But all in all, we made history!

Elizabeth’s energy and ball-stealing boosted morale and wowed the audience as she worked with her sister Sarah (point guard) and followed instructions from her other sister Rachael on the sidelines. Savanna was another stand-out of the game, rebounding almost every one of the other team’s shots. Sarah held the team together and helped the new players Isabella, Avery, Tiyon and Grayha. Spirits were high after the game despite our loss because our basketball program was finally launched. Coach Gates said, “It was a great first start and very entertaining.” Senior captain Sarah said, “I thought we played really well–it was many of the girls’ first time on the court and they did great.”